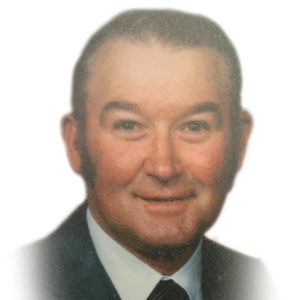 He was born July 15, 1934 in Rock Springs, Wyoming, the third child of Albert Alton and Louise Syme Hoffman.
Robert grew up in Benson and spent his childhood working on the family farm. He graduated from North Cache High in 1952.

He was an active member of The Church of Jesus Christ of Latter-day Saints and served in different capacities including 2nd Counselor in the Ward Young Men’s Presidency.

Robert farmed all his life and was a hard worker. He was an active member in the community working as a 4-H leader, baseball coach, and was active in the Farm Bureau for many years. He loved to have fun, spending his free time hunting, snowmobiling, and 4wheeling with family and friends.

In later years he was most often seen riding his 4wheeler with one of his faithful Golden Retrievers at his side.

He was preceded in death by his parents, his son Steve, brother Alton, brothers-in-law Lynn Ricks, Ralph Downs, and a nephew Dee Ricks.

“We love you past the moon and miss you beyond the stars.”