CACHE COUNTY – State health officials have announced that Cache County will move to a Yellow/Low COVID-19 threat level on Friday, May 15, one day prior to the rest of Utah. 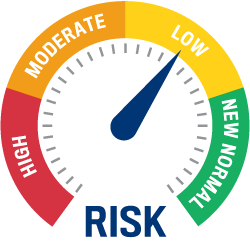 That exception to the statewide Orange/Moderate threat level was granted by Jefferson Burton, the acting executive director of the Utah Department of Health, in response to a May 5 letter from the members of the Cache County Council.

“I believe our citizens are anxious and ready to move to a less restrictive environment,” said County Executive Craig Buttars, “with an abundance of caution to keep us healthy and safe.”

During a May 14 press conference, Gov. Gary Herbert had announced that most of Utah will transition to the Yellow/Low risk level for COVID-19 starting Saturday, May 16. The exceptions to that transition will be three counties and two metropolitan areas. Those are Grand, Summit and Wasatch counties, along with Salt Lake City and West Valley City. Those areas will remain in the Orange/Moderate risk level for an unspecified period.

In his May 12 letter to Lloyd Berentzen, executive director of the Bear River Health Department, Burton wrote that Cache County was approved to move to the Yellow/Low risk level one day early in recognition of the county’s outstanding “efforts to combat the COVID-19 pandemic and support of Gov. Herbert’s ‘Utah Leads Together’ plan.”

Under the low-risk regulations, groups of 50 or less can gather in Cache County while still maintaining social distancing. Team sports can resume if symptom checks are performed before practices or games. Stay-at-home recommendations are lifted and travel throughout the county and state is approved. Public pools can also reopen as long as swimmers stay six feet apart while out of the water.

In their letter to Herbert, the members of the county council requested that Cache County be allowed to “reduce restrictions … to rebuild our economic and social structure.”

As justification for that request, council members cited Cache County’s success in battling the coronavirus as well as the negative social and economic impact of the restrictions mandated by state authorities.

Writing on May 5, they said that Cache County had had only four new cases of COVID-19 in the previous two weeks, for a total of 44 cases with 25 of those recovered and only 6 hospitalized. Moreover, the entire Bear River Health District had recorded only one death at that point.

On the other hand, calls to local domestic violence crisis hotlines had increased 95 percent in March and April, two suicides directly related to pandemic isolation had occurred and food assistance requests from victims of personal crimes had more than doubled in the same period.

In terms of the negative economic impact of the pandemic, the council members reported that local small retailers, home businesses, arts groups and the hospitality industry were suffering losses greater than those during Great Recession of 2007-08. The cancellation of local summer theater programs was expected to result in losses of $17.6 million in direct spending and $13.8 million in event-related spending for a total negative impact of $31.3 million. Finally, local restaurants were reporting a 60 to 70 percent reduction in their usual business despite creative efforts to provide deliveries and curbside service.

The county council members argued that expeditiously moving to the Yellow/Low risk level would bolster public confidence, buoy up businesses, encourage tourist loyalty and save lives and livelihoods.

The council members pledged, however, that county residents would continue to be careful and cautious under the Yellow/Low risk level as well as protective of the county’s high-risk population.

“Communication between local elected officials, the Bear River Health Department and the Utah COVID-19 Task Force has been excellent,” Buttars said while announcing the county’s change of risk status. “(That communication) will continue … throughout this entire process.”

Governor authorizes move for most of Utah to yellow, low-risk level for COVID-19