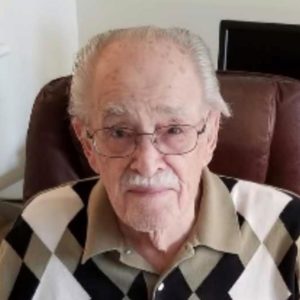 He grew up attending local schools and enjoying the beauty of Cache Valley while camping, fishing, hiking, skiing, playing school sports, music and various other activities. The Scouting (BSA) program was an important influence during his adolescence and he carried those learned skills throughout his life.

Education: Vern graduated with a BS in Chemistry from Utah State University in 1940. He attended the Naval War College in Newport, Rhode Island, in the early 1960s, completed several military advancements throughout his career, and received his Real Estate License in 1970.

Outstanding Memories and Accomplishments: While growing up, Vern worked part-time for his father who owned the City Drug Store in Logan, earning a little extra cash while also learning a bit about Chemistry. He enjoyed music and played in a dance band while attending USU and was a member of Sigma Chi Fraternity. Upon graduating, Vern joined the war effort as a Commissioned Officer in the United States Marine Corps and his life of travel began. While stationed in Iceland at the very beginning of the United States involvement in WWII, Vern stood at the head of his military unit and shook hands with Winston Churchill.

Vern married Lucile Macfarlane in 1942. After a short time together, he served for three years in the Pacific Theater. Following the war, their life of military service and adventure continued. Dad served in the Korean War, on Okinawa, with assignments in Panama, Saipan, Hawaii, Italy (working with NATO), and many additional locations in the USA. Vern was the military aide to Utah Governor J. Bracken Lee at President Eisenhower’s Inauguration.

Upon retirement from a 30-year military career and as a full Colonel in the USMC, they moved to southern California in 1966. He had a varied business career, working for a large government contractor (Division of North American Aviation), playing his hand in the Real Estate Industry, and was also an owner/officer in a company named Standard Power. He and Lucile decided to finally retire to the then small town of St. George, Utah, building a home in Bloomington and living there until her death in August of 2017 after 75 years of marriage. Vern then moved to Salt Lake City to be closer to his children.

Hobbies and Activities: Vern became an accomplished Black and White photographer, developing and touching up his photographs and prints in his own darkroom which he built from scratch. He was a member of an artist co-op where many of the prints were displayed. Over the years he received many photography awards, including from the Smithsonian in Washington, D.C. He wrote a comprehensive book titled BLACK and WHITE FINE ART PHOTOGRAPHY.

Vern developed a successful honey business named ‘Moonie Bee Honey’, selling thousands of pounds of pure sweetness. He was a champion skeet shooter, winning the European Military 12 Gauge Championship when he was stationed in Naples, Italy. He was a master fly fisherman and an expert at tying flies. Vern ran the St. George Marathon while in his early 60’s.  He was a leader in the Scouting program of his church and oversaw young men achieving their Eagle Award.

Changes: Vern has seen many changes in his lifetime including political, technological development, and community growth, to name a few. He has always been interested in learning about and using modern technology ranging from computers, to cell phones and hybrid cars.