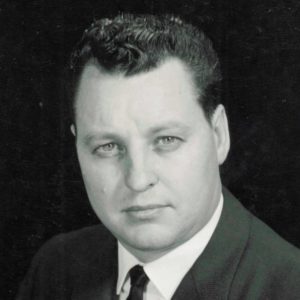 Keith Leroy Mann, 90, passed away on Wednesday May 6, 2020, at Autumn Care Assisted Living in Hyde Park, Utah from complications of dementia.

He was born on November 30, 1929 in McDonald, Kansas to Clifford Burke Mann and Opal Mae Craig. It was when his family moved to Inglewood, California that he met his future eternal companion Elizabeth Hill Shelton. He loved letting everyone know he had picked her out when he was in the eighth grade and she was in the sixth grade. Years later, they were married on January 29, 1950 and were sealed in the St. George Temple in 1955.

Keith worked nights while in high school at North American Aviation making drop tanks for the P-51 Mustang. His amazing 37-year career led to many opportunities working on airplanes with North American Aviation; the Apollo Space Program with North American Rockwell; the Space Shuttle Program and the very beginning of the GPS Satellite System with Rockwell International. He was awarded an Astronaut Personal Achievement Award, the Silver Snoopy, from NASA Astronaut Alan Bean for his work on the Apollo Command and Service Modules, however he felt his greatest achievement was that of his sizable family. He celebrated each new addition with pride.

After retiring, they moved to Logan in 1988. Keith found lifelong joy in his service at home, in the Church of Jesus Christ of Latter-day Saints, and the community. His volunteer service included 3 years on the Logan Water and Sewer Board and over 1,344 hours at Logan Regional Medical Center, driving the tram and as a greeter at the information desk. He enjoyed people and loved to tell jokes and his career stories to everyone he met.

Graveside services will be held on Saturday, May 9, 2020 at 1:00pm at Newton Cemetery. To view the service virtually via Zoom, the link will be available at www.allenmortuaries.net.

Our family would like to thank Autumn Care Assisted Living, Signature Home Health and Hospice, as well the family members, friends and his dear neighbors who provided countless hours of service on his behalf.