It’s a book you can find on Amazon, and the story behind the book ties in directly to modern times and some of the challenges being faced right now. Fawn Zwickel is a V.A. volunteer, a doctoral student in psychology and is co-author of a book entitled “From Omaha Beach to Nuremberg: A Memoir of World War II Combat and the International Military Tribunal”. In her description of the book, some of the themes touched on were themes of sacrifice, to do what was necessary. On KVNU’s For the People program on Thursday, Zwickel said our current sacrifices pale in comparison. 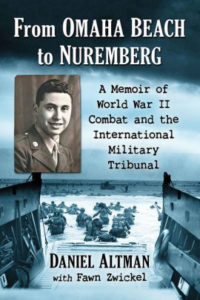 “I do believe that there are a lot of life lessons that we can learn and I do believe that we are a generation that will rally, just like our previous ones have. There are lessons that can be learned from it. Just looking at World War II generations, you see them being humble, they don’t act like they’re owed anything, and they know their roots. And they don’t act like they’re elitists or entitled for anything,” she explained.

The book follows the story of Sgt. Daniel Altman, who is Zwickel’s grandfather and co-author of the book. Zwickel said much can be learned from that generation. Life lessons include being respectful and that respect is earned not freely given, also being thankful. She says her grandfather’s generation never took anything for granted, while our generation is disconnected from the basics.

“Because it’s been spoon-fed. You’ve got things like the technology with the internet where lives can be made simpler and easier. But in the grand scheme of things, it’s handicapped us. So, the World War II generation had to figure it out, and in that process that we’ve skipped over, there were vital key life lessons to be learned. They learned by observing, they figured out by experimenting, and they were successful by persevering, which is, I think, something  that we all aspire for.”

Zwickel said she had to nudge her grandfather to tell his story and that people could learn from him. She said our generation doesn’t take the time to listen to these stories that could benefit them, especially during another trying time in history.