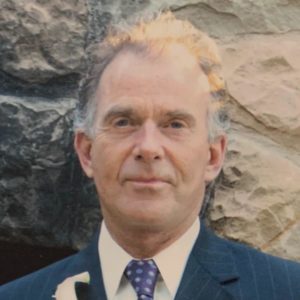 Laurence Douglas Israelsen, 74, passed gracefully to the next life on April 25, 2020, surrounded by his loving family, following a cerebral aneurysm and subsequent hemorrhages.

Doug’s life represents a stunning array of accomplishments, quiet service and boundless curiosity. He was an elegant Renaissance man: composer, designer, compassionate friend, surgeon, nature and animal lover and was relentless in his quest to learn, master and experience everything possible.

On August 6, 1945, a bomb was dropped on Hiroshima. That same day, Lyle Israelsen, having obtained leave from the Navy to join his wife Nancy for the birth of their first son, proudly welcomed little boy Dwight into the world. A few moments later, another bomb was dropped. To everyone’s great astonishment and joy, the doctor exclaimed, “There’s another one coming!” and Doug made his extraordinary grand entrance.

Throughout his life, he continued to surprise and delight with his boundless capacity to live life to the fullest.

Doug flourished alongside his twin on their idyllic small farm in North Logan. It was every little boy’s dream with wide open fields, mountains and streams to explore with his ever-growing number of siblings and neighbor kids.

Here Doug learned the value of hard work and play from his Dad as he worked alongside him in the hay fields, planted and harvested, milked cows, hunted, rode horses, camped and devised hilarious pranks.

With his Dad as scoutmaster, Doug earned his Eagle and cherished the times they spent together. He learned from both parents to pause and take time to appreciate and give thanks for the beauty of nature and animals. His innate artistic talents and love of learning were encouraged by his mother, who supplied him and his 11 siblings with every imaginable book and type of art media. Creativity flowed effortlessly from Doug as he created woodcuts, paintings, mosaics, hunting bows and sculptures.

Doug was also a gifted athlete, participating in many sports including basketball and football at South Cache High School. He spent his teen summers working construction and along with Dwight assisted in building I-80 through SW Wyoming. His natural charisma, good looks and penchant for creating excitement garnered him a wide range of friends. Following a year at USU and his Brazilian South mission, Doug married Karen Colette Nixon and they were blessed with six beloved daughters.

Doug finished his degree at BYU and was accepted at the University of Nebraska-College of Dentistry. After graduating Magna Cum Laude with his DDS degree, Dr. Israelsen completed a residency in Oral and Maxillofacial Surgery at the esteemed Mayo Clinic in Rochester, Minnesota and subsequently set up practice in Salt Lake City. His unquenchable passion for learning and sharing led him to continue his cutting edge studies well beyond his terminal degrees, always staying abreast of the latest techniques. His distinguished career brought many positions of leadership including President of American Craniofacial Associates and President of Utah Society of Oral and Maxillofacial Surgery. He was in demand as a lecturer in renowned schools including Harvard Medical School, Beijing Medical School, Medical College of Virginia, and is known throughout the world for his pioneering and research in the field of auricular craniofacial implants. He was the first surgeon west of the Mississippi to receive authorization to use the procedure for missing ears, noses and cheeks. Doug loved his work and was widely recognized by peers and patients for his skill, caring and expertise.

His artistic talents flourished throughout his adulthood and included woodworking, exquisite original piano compositions and most notably, life-sized bronze sculptures. He prided himself on his World Champion Quarter Horse Okie, the model for his sculpture “Great Western Tradition,“ which stands at the American Quarter Horse Museum in Amarillo, Texas.

Doug loved watching his daughters grow and cherished the time he was able to spend working with them in his office. He took great pride in their achievements and in the women, wives and mothers they have each become. In his later years, he found his soulmate, Karen Marie Kruger and together they enjoyed their shared passions of raising Andalusian horses, working on the ranch and traveling to their home in Florida.

Perhaps the most meaningful elements of Doug’s life can’t be found in diplomas, awards or titles, but in the generosity of his soul, his deep caring for people and the quiet service he so freely gave. Most are unaware of the countless weeks he volunteered back in his beloved Brazil, in humanitarian medical service to the people he had come to love on his mission, or of the innumerable times he marked a surgery as “no charge” to help out a patient in need. Doug was a genius at knowing exactly what a person needed most, and then he just gave it, no matter the personal cost or time involved. One little known example is his taking a homeless man to lunch, and then meeting with him regularly and over years sponsoring him in a literacy program and housing to better his life, or the time he took 200 homeless people to Chuck-A-Rama for Christmas dinner. He is legendary for his quiet giving within his family and known as The Candy Man and Awesome to all nieces and nephews. His far-reaching influence for good has touched countless lives and his beautiful and compassionate heart lives on through his deeds and in the lives of his posterity.

Memorial services will be announced when it is approved to meet.

In lieu of flowers, donations may be sent in memory of Doug Israelsen to Shriners Hospital in Salt Lake City through check or by using the following website: donate.lovetotherescue.org

Condolences and memories may be shared with the family at premierfuneral.com