A Food Pantry Parade similar to this one that took place in Davis, Morgan and Weber counties will be going through four Cache Valley Communities on Friday, April 24, 2020. The food drive parade is sponsored by Young Automotive Group,

LOGAN – After conducting a successful Food Pantry Parade in Weber, Davis and Morgan counties a few weeks ago, the Young Automotive Group is planning one this week in Cache County. Young Toyota General Manager Jake Talbot says the parade will wind its way through Smithfield, North Logan/Hyde Park and Providence from 10 a.m. to 2 p.m. on Friday, April 24 and is a great way for people to donate to the Cache Community Food Pantry without leaving their homes. 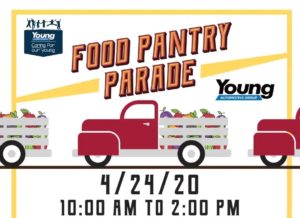 “We’re going to have a school bus, police officers, fire trucks, probably some fancy cars that will be going through these communities,” Talbot explains. “The idea is, people can bring their food out to the curb and have a contactless way of donating food. Hopefully, for the kids, it will give them an opportunity to look out the window at some cool cars, a school bus, hear some sirens and see Cache Valley come together to support people (who) are struggling.”

With the Boy Scout and U.S. Postal Service food drives cancelled, along with rising unemployment, local food pantries need extra help. The Cache Valley Media Group sponsored a Drive In and Drop Off food drive on Saturday, April 18th. But this food drive sponsored by the Young Caring For Our Young Foundation will be rolling throughout Cache Valley communities so people don’t have to leave their homes, and the need for help still exists.

“The combined parades we did in Weber, Davis and Morgan counties was 22,736 pounds. Personally, I would love to get at least 22,737 pounds,” Talbot says with a chuckle. “We’re after a lot of food! We want this to be huge, and at the end of the day it’s just a way to help people out because there are a lot of folks who are limited on what they can do for work. We just want to make sure and do the right thing.” 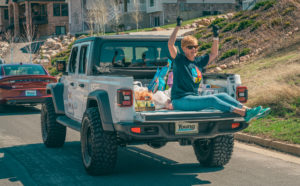 Talbot says the parade will go through a good number of neighborhoods, but can’t go down every street.

“If you don’t see us go by your house – we definitely don’t want people coming to find us and gathering, we want to respect everything the government has asked us to do – during those times you can go by either Smith’s, you can go by Ridley’s in Hyrum, Macey’s, and we’ll have trucks there where you can donate food,” says Talbot. “Before the event and after the event at either Young Toyota or Young Honda, we have trucks out front, labeled where you can drop food off as well.”

The auto dealer has also partnered with Cache Education Foundation, Macey’s, Smith’s Marketplace and Smith’s Food and Drug, Ridley’s Market in Hyrum, Cache Valley Media Group, the communities where the parade will go through and Utah State University to help collect food.

“The food pantry has a couple of large trucks that will be there. Utah State will be there with some of their student athletes; Big Blue will be making appearances at some of these parades; Utah State will have their equipment trailer that will be empty and we’ll be packing that with food. Then, we’ll have a lot of trucks from the dealerships here, we’ll try to find some fun ones for the kids to look at to try to fill up as well.”

“I know Cache Valley to be a very generous group of people,” Talbot adds. “I think it will be really fun to see what people are willing to donate. Really, in a time when we are all just kind of twiddling our thumbs, it’s something we can do that’s productive, get our kids involved and we can go out there and really help someone out.”

To learn more about the parade, and what communities will be involved, visit www.youngautomotive.com/pantry-parade.htm