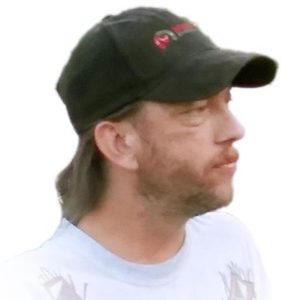 Along with his Dad, Ron Harrop and Grandpa, “Doc Brown” Jason learned to love fishing and mechanics. Jason loved being in a boat or garage working on cars. He was proud of his “Dukes of Hazzard” Charger that he was restoring.

Jason spent his youth mowing lawns for spending money and could be seen at an early age working. He said that mowing lawns gave him time to think and was relaxing for him. He also worked at The Lofthouse as a cook.

Jason furthered his education by taking courses at BATC in welding and computer repair. He worked for DuPont Holographics until his muscular dystrophy, which he was born with caused him to end his employment.

Jason met Sundie Bills in high school and they were married on March 27, 1999. They had two children. Luke and Shelby. Shelby is married to Aidan Mendenhall.

Jason was a friend to all. With his muscular dystrophy he was limited somewhat in what he could do, but he never gave up!! When something came up that he could not do, he would figure out another way to do it. Jason loved his family. They were the motivation in his heart.

A private graveside service will be at 11:00am on Friday, April 24, 2020 at the Hyrum City Cemetery with a brief viewing prior at the cemetery.