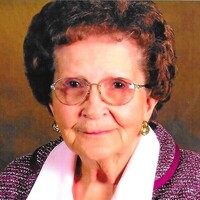 Lou was born December 22, 1922 in Malad, Idaho to Hugh Lusk Jones and Millie Bloxham. She grew up on the family farm and attended Malad schools until the farm was sold and they moved into town when Lou was in High School where she graduated in 1941.

On July 4, 1942 she married Samuel Claude Williams and they lived in California while Claude was stationed in the Army. They came back to Malad to live in the little town that they loved and it was here they later raised their three children Delpha, Randy and Kerry.

Lou was a member of the Church of Jesus Christ of Latter Day Saints and held many jobs. She loved the Primary and all the neighborhood kids and the kids in the Ward affectionately called her “Grandma Lou”.

She loved the summers. After Claude quit construction work and went to farming she would drive the grain trucks even though sometimes she could hardly see over the steering wheel. She loved spending time with the grandkids and they loved being with her. They have so many stories to tell of being with her that they could write a book.

A private family service will be held in honor of Lou and burial will be in the Malad City Cemetery on Thursday, April 23, 2020. The family looks forward to a Celebration of Life for her at a later date.