BRIGHAM CITY – This is the first time in over 100 years that Brigham City’s Capitol Theatre has been closed for any length of time, except for remodeling or upgrading the building, said Kerry Walker, whose family owns the business. COVID-19 has made him close the doors to ensure social distancing. 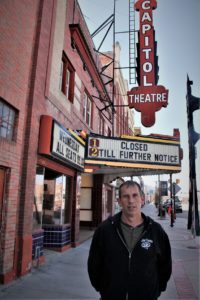 “We still have a pick-up at some of the theaters for our gourmet popcorn,” Walker said. “We started making kettle corn years ago.”

The Capitol has been in the Walker family since 1934, when Walker’s grandfather, Vosco Call, bought it from one of the original owners. Originally, it was called The Elberta Theatre. It opened in 1917. He said people used to go to the movies to see the news. The theaters would show news reels before the shows.

“It has a stage in the front where they used to do vaudeville shows,” he said. “The dressing rooms are under the stage.”

Walker walked over to two long spotlights used in the vaudeville days. The long black lights are parked in one of the front windows. Walker pointed out how they worked.

“My grandfather Howard Call was a U.S. Marshall and my dad ran the Capital Theatre and the Big C Drive-In,” the full time Autoliv engineer said. “I’ve been involved in the theatre since I was five years old when I picked up trash after the movies.”

At 10 years-old he was selling tickets. 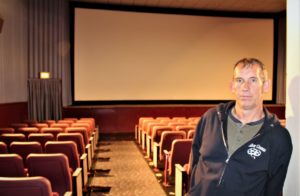 “There are two projector rooms and an apartment above the lobby,” he said. “My mom and dad lived in it. I lived in it when I was first married.”

Subsequently, other young married relatives have used it.

“They have to make the kettle corn for rent,” he said. “My nephew is living up there currently.”

In 1984, some of the ceiling started to fall, so they closed it down and fixed it. They divided the over 500 seat theater into two theaters. They can now show two shows at once. In 1978, they built Walker Cinemas in Perry.

The family decided to close the Big C Drive-In around 1987. Walker said VHS killed the drive-ins.

“The last 30 years, me and my two sisters have run the theaters,“ he said. “My father retired and we took it over.”

Kerry and his two sisters, Patty Bennion and Shauna Timothy, now own the Capitol Theatre, Walker Cinemas in Perry and North Ogden, and the Cinefour in North Logan.

“We installed digital projectors in the Capitol seven years ago,” he said. “We had a good clientele, but digital has changed the dynamics of the movies.”

Today, movie companies ship hard drives that are specially coded, without the code the movie can’t be played.

Kerry and his two sisters are hoping the next generation will take over for them.

“You can’t just rely on theaters to make a living,” Walker said. “Running the business is more a habit than a hobby.”