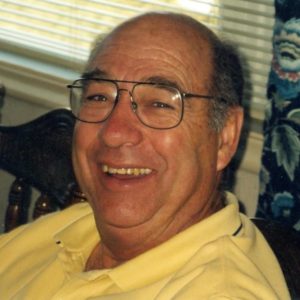 Our family had its Good Friday miracle: Shortly after a Priesthood blessing, Richard Olsen Eames, 83, passed away at Logan Regional Hospital in the evening of April 10, 2020.

He was a first baseman for AutoCare softball team. He played on the Logan Eighteenth Ward M-Men basketball team. He refereed Church and municipal basketball games and umpired baseball games. He was an LDS missionary in Western Canada. He served in the U.S. Army at Fort MacArthur in San Pedro, California.

He learned how to be a butcher at Temple Grocery on the corner of 300 North and 300 East in Logan. He was a truck driver and could precisely back a ten-wheeler and a pup up to a lay down machine.

He was a volunteer usher at the Ellen Eccles Theatre and for the 2002 Olympics. For Family Home Evening at Legacy House last Christmas, he sang “Willy Claus” with a little choir he put together.

He owned a red jeep, a blue jeep, a white jeep, and a Volkswagen Bug. He took us to the top of Mt. Logan and to the top of Willard Peak and everywhere in between.

He was born to Edward Henry and June Olsen Eames on March 12, 1937, in Logan, Utah. He married Sharell Baird on September 21, 1961, in the Logan Temple. He lived in Providence for 48 years and will be buried in the Providence Cemetery.

His son, Michael Joseph, passed away in 2010. His brother, Emerson, and his brother-in-law, Theron Baird also preceded him in death.

We are grateful for many wonderful providers who cared for him at Logan Regional Hospital and, for the past two years, at Legacy House Assisted Living.

A family Graveside will take place Friday, April 17, 2020 at the Providence City Cemetery.