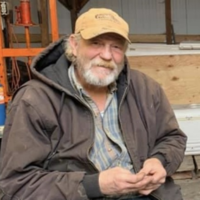 Bruce was born in Brigham City, Utah and was the son of Jerry and Elna Christensen. Bruce was the ninth child among twelve other brothers and sisters. He was raised on his family’s farm and loved getting into all sorts of mischief with his siblings.

Bruce retired from Hill Air Force Base in Utah as a civilian. He had many jobs out there and acquired many awards for his dedicated service. After retiring you could always find him in his shop, building something out of wood, fixing something for someone or just tinkering on whatever he could find. But his true talent and love was caring about everyone he knew. If you were lucky enough to have known him than you knew you could depend on him for anything.

Bruce loved anything that had to do with the outdoors and family. If he wasn’t camping in the summer, he was hunting in the fall. His favorite time of year was the deer hunt. That’s when a lot of his family and friends would come and stay at his house. It was always the best time with so much fun, laughs, and food. Those will forever be the best memories everyone will cherish.

He loved his family so much and they meant so much to him. But his grand babies, as he always called them, were the light of his life and the twinkle in his eye.

Bruce lost a very short battle with cancer that he fought till the very end.

He was welcomed to Heaven with loving arms by his parents Jerry and Elna, brothers Roy, Voy, Dennis and Brent, brothers-in-law Charles Mack and Sidney Heller and a nephew Trent.

Bruce will be missed by so many and meant so much to so many people, but most importantly his family. There is a huge hole in so many hearts. He took with him so much when he left us too soon. But he also left us with so many memories to cherish.
He always had a smile on his face and love in his heart.