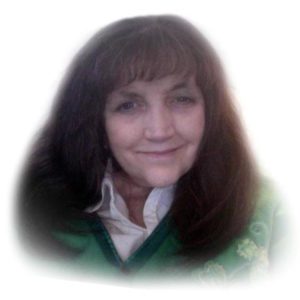 On the evening of 29 March 2020, Deborah Lee Moss Christiansen, aka “Mrs. C.” slipped from this frail world into the loving arms of her Father in Heaven. Surely also waiting were her mother and dad (Paula and Donald L. Moss), Granddaddy and Mammaw, and her big, brindle mastiff, Moses. She passed, not from COVID19, but from complications and the cumulative effects of Complex Regional Pain Syndrome (CRPS) which was known as Reflex Sympathetic Dystropy (RSD) when she first felt its fiery burn, consequent to an experimental knee surgery in 1984.

Born on 14 August 1955 in the town of Orange, in the bayou country of Southern Texas, she was intensely proud of her deep southern roots. She also counted in her heritage early settlers of Jamestown, Virginia, Boston, Massachuttes, soldiers of the Revolutionary War, and fighters on both sides of the Civil War. The eldest of three siblings (Donna Marie Moss and Donald Langston Moss II), she grew up everywhere: after Texas, she spent time in Maryland, Illinois, Massachusetts, Idaho, Rhode Island, and Virginia.

In 1973, after graduating from Highland High School (Highland, Illinois), Deb enrolled at Ricks College (now BYU-ID). Early that fall, she met a young man, James Christiansen, but didn’t have a chance to get acquainted until their sophomore year, when they recognized one another on the first day of a Poetry class–a class which neither had initially intended to take.

A convoluted path after graduating–which included a Church mission for him, and a degree in Elementary Education from BYU for her–eventually led them to the Jordan River Temple where in 1982 they were married for time and eternity. They settled into a little yellow house on what was then the outskirts of Logan, Utah. She taught school and he delivered mail.

1990 brought them change in the form of a well-coiffed baby girl, whom they named Sadie-Anne, and who would be their only child. Three days later, Deb and her little family moved to Petersboro, Utah.

Sadie-Anne became the light of Deb’s life, after years of wondering if cats and dogs might be her only children. She participated as she could, but because of the increasingly debilitating symptoms of CRPS, was often absent from special days and events in her daughter’s life: Mendon May Days, T-ball, Primary programs, horse activities, parent-teacher conferences, Cache Children’s Choir concerts, Young Women’s Camp, Sadie-Anne’s solo vocal recitals–she attended these mostly in spirit, though she remained supportive and upbeat about her daughters activities.

Deb taught elementary school for 22 years: 2 each in Spotsylvania County, Virginia, Rexburg, Idaho, and 18 in Box Elder County: Perry, Fielding, and Brigham City. She loved especially when the light of reading would brighten her students’ eyes. CRPS finally ended her teaching career in 2001.

The next 12 years were fraught with challenges: ER visits, Life Flights, hospital stays, broken bones from falls caused by intense spasms, a hip replacement for a hip broken by spasming muscles, convalescent care centers, a new diagnosis from U of U Neurology ICU in addition to CRPS: Stiff Person Syndrome: but good news too, the spasms were controllable by medication, and, though they ceased, CRPS pain increased, and by the end of 2012 had become global, affecting her entire body, and she was almost completely bedbound. In 2015 they moved back to Logan, and Jim retired from the Postal Service in order to take care of her full time.

Visitors to her bedside would be surprised when they came and found a classy lady, ready with a smile and a listening ear. Some came away talking about the sunshine in her room even when all was dark or stormy outside. One visitor remarked that when she herself was feeling gloomy, she would come visit Deb and that would cheer her up. Nurses and aides commented many times they looked forward to looking after Deb’s needs because she was always so pleasant. She hated the thought of being a burden to others.

Through it all she never wavered in her love of the gospel. As she could, she would fulfill church callings. For a time preceding Sadie-Anne’s birth, she ushered at the Mormon Tabernacle Choir’s weekly broadcast on Sunday mornings. She enjoyed especially indexing original genealogical records into digital media when she was able. Though not initially evident outwardly, her faith was deep, and quiet, and strong. As her conditions progressed, she enjoyed the sometimes escapism afforded by watching television, especially on particularly bad days. She was recuperating first at Sunshine Terrace, and recently at Maple Springs after several ICU stays, working to gain strength to return home. She was excited one day at the Terrace when she had walked 123 steps with her walker, each way! It was during yet another visit to the ER from Maple Springs when we lost this wonderful lady.

She loved the furry creatures of this earth. There was not a homeless or stray cat or dog safe from her rescue to be brought home to join her menagerie of wayward kitties. On more than one occasion she was known to hide a stray cat or dog in her classroom until time to go home. She rescued one tiny kitten from the far bank of a ditch full of water, while in a leg cast! She loved to travel! Memories and photographs of past trips were plentiful. Over the years she was able to visit Europe, Canada, Mexico, every state in the US except two. Christmases and beach visits to her family in Virginia were special to her. Civil War re-enactments with her family while growing up gave her a love of camping. She looked forward every year to Jim’s family’s campout in the Bear River Mountains above Bear Lake. She loved the beach whether Bear Lake or the Outer Banks or the Gulf Coast. She devoured books, loved movies, old and new, television documentaries, beading, creating greeting cards (with her rubber stamps or virturally), evenings of playing board games and eating popcorn and every holiday. While teaching she spent hours decorating her classroom for each holiday.

She was a gifted poet. On the page was the one place she would let go and spill out her fears and frustrations, but she kept most of her writing to herself and did not want to worry others with her struggles. She wrote with a tiny, precise script, which we will miss.

Now beyond the reach of physical pain and weariness, she can move and dance and stand straight up, and she can kneel! She can run with all her furry friends whom she loved in years past, and who’ve been waiting for her to join them. She had no doubt of the prospect of seeing them all again. For now, the animals here will miss her. We will miss her. We will miss the laughter in her voice, the sparkling fire in her eyes and her bright, incomparable smile! (Someday, Deb, you and I will hike the Uinta Mountains. We won’t need a backpack. I will take you to Debbie Lake, like I promised you.)

Deb is survived by her husband James, Logan; daughter Sadie-Anne, Ogden; sister Donna Moss, Montpelier, Virginia; brother DJ Moss, Newport News, Virginia, and many many nieces and nephews scattered all across this land.

The family would like to thank all who have had a role in caring for Deb over the years, with a special shout-out to the team at Logan Regional Hospital ICU. Please remember them in your prayers during this dangerous time. Also to Dr. Cindie Dodenbier and Dr. Kevin Duke for your faith in her.

Due to COVID19, there will be no funeral at this time. A private graveside service was held Friday, April 3, 2020 at the Mendon Utah Cemetery. There will be a memorial scheduled at a later date and noted on the Allen-Hall website when the madness has passed.

In lieu of flowers, Deb would wish you to donate to Tasha’s Furry Friends Sanctuary in Trenton, Utah www.tashasfurryfriends.org