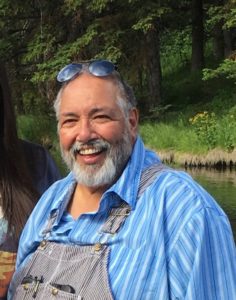 Growing up our dad was like a superhero. He was a fireman for 30+ years, an EMT, and on Search and Rescue. As kids we grew up knowing we would have to leave movies and dinners to race to the fire station and hang out with the old men. Hearing Dad’s pager go off in the middle of the night and listening to Dad run down the hall to go help those who needed him, always made us proud.

To his kids, he was “better than Google”, the guy we would call for advice or help with anything. When Kellie mentioned her Christmas tree would look better on a wall that didn’t have a plug. She came home from work the next day to find her Christmas tree was moved and a new outlet was wired in. When Alex moved to Taiwan/Philippines, Dad would set an alarm to get up in the middle of the night to talk to him. When Robin bought a “fixer upper,” Dad was over there every day “supervising” Jared.

As his kids, we knew we could count on Dad for anything. When we volunteered, it meant Dad volunteered. We signed Dad up for 3:00am shifts during our relay race days (it was the best to be greeted by his smiling face, a giant bear hug, and him cheering you on telling you how proud he was as you ran by in the middle of the night).

When it came to his grandkids, there wasn’t anything he wouldn’t do. He never missed a sporting event, singing concert, art show, or anything else they were involved in. When they showed interest in something, he would research to become the subject matter expert. He talked science with Timber during their weekly video calls, went to sporting events with Ryker, took fashion advice from River, and supplied Kya with an overwhelming demand for dress up and fingernail polish.

He loved his sons-in-law Jared (Robin) Bailey and Brodey (Kellie) Hansen like they were his own sons. He was a proud older brother to Marsha Martz and Cathy Pommier, found a best friend in his brother-in-law Greg Martz, was excited to have Angie Hawkins join the family, and enjoyed being an uncle to Cy and Chandra Martz. Dad had four older brothers that he didn’t see enough but appreciated the time he had with them: Fr Dick Pommier, Gary Schmitz, Terry Scmitz, and Mike Pommier.

The man, the myth, the legend, the overalls. Andre “Andy” Pommier, our dad, lost his rapid battle with liver cancer on March 15, 2020 and joined his mom and dad, Santos and Godfrey Pommier, in heaven. There will be no services, but if you want to pay tribute, be a helper. Be selfless. Be kind. Dad’s greatest joy was found in helping others. The world now has one less helper in it. Be a helper.

Condolences and memories may be shared with the family at gfc-utah.com