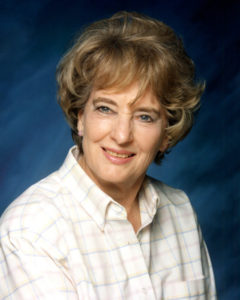 Violet Kane Howell, 88, of Idaho Falls, passed away peacefully in her home surrounded by her loved ones, on March 27, 2020.

Violet was born June 9, 1931, in Boise, Idaho, to Preston Arnold and Mildred Read Kane, in the middle of the Great Depression. (This was also the year the first airplanes began flying into the Gowen Field Airport.)

Young Violet attended schools in Boise and was in the 5th grade when WWII broke out, which forced three of her older brothers into the armed forces. Growing up during war time made a huge impact in her life, and instilled in her the necessity of the sacrifice for freedom and the blessings of service.

Violet graduated from Boise High School in 1949, and from St. Luke’s School of Nursing, in Boise as a registered nurse in 1952. That same year, she married Lamont Glen “Monty” Howell, which brought her to Idaho Falls, where she has since resided.

Violet worked off and on as a nurse, but enjoyed being a homemaker more, and devoted her life to raising their five sons and four daughters. She loved children and ran a child daycare in her home for 13 years; later worked in the lunchroom at Ethel Boyes Elementary for 14 years.

Violet enjoyed gardening, sewing, oil painting, and anything creative, but her real passion was participating in family history.

She was a faithful member of The Church of Jesus Christ of Latter-day Saints and served in many capacities. Her service, alongside her husband, Monty, in the Idaho Falls Temple was extra special to her.

Violet was preceded in death by Monty, her husband of 65 years; a son, Darrick Tobyn, and daughter, Paula Rae; her parents; sisters, LaRita and Helen, and brothers, Alma, Alva, and Robert.

Condolences and memories may be shared with the family at woodfuneralhome.com