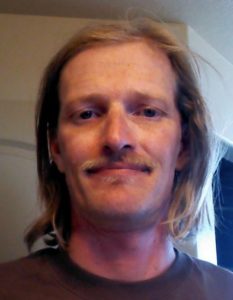 James Thomas Sowder, born October 5, 1974, a Monday, early dawn, normal and healthy at the McKay Dee Hospital, Ogden, Utah. Then one week later he was diagnosed with heart failure and admitted to the Primary Children’s Hospital, Salt Lake City, Utah. At this time he was blessed that he would live to complete his mission on earth. His mission ended after being rushed to the University of Utah Hospital, Salt Lake City, Utah late Thursday. He suffered a cardiac arrest, which his heart would not restart, mid-morning March 27, 2020 and was pronounced deceased. He could not will his heart to continue.

James was a normal, exuberant, very intelligent leftie. He had many adventures prior to kindergarten, like riding his big wheel down a flight of stairs. He enjoyed piano lessons, playing a very rousing Battle Hymn of the Public, the classics with feeling and appreciation. He was enthusiastic for sports, camping, fishing, hunting, and other outdoor activities. He graduated early from Weber High School and enrolled in Weber State University, earning an auto mechanic certificate. He did auto servicing for a while, then entered the building trade, one could say that he was a jack of all trades. During his leisure he took up jet skis with a passion. After a lull in home building construction, he journeyed to Odessa, Texas, working in road construction.

James returned to enroll in Weber State obtaining a Machining Associate Degree and worked for Parker Aerospace. He had another heart problem and was forced to retire. He then enrolled in engineering at the University of Utah, but because of the medication could not continue.

James was passionate and very convicted with his endeavors. He bagged a trophy elk and had the rack mounted. He had an excellent sense of design and proportions. His work was professional in design and quality. He did auto repair as a vocation and had several plans for vehicle restoration.

James had a keen intellect, was knowledgeable in many fields, and possessed many talents. He valued his friendships with others and was willing to use both to help them. James was very diplomatic but could rage at a misdeed. James was always planning for the future to the end.

He married Ann Marie Edwards. Their children are Katherine Sowder, and Evelyn Sowder both at home in Taylor, Utah. James was very proud and protective of his family. He aspired for his wife and children to set lofty goals and to always do their best. His goals for his girls was to achieve their best in higher education.

James was a member of the Church of Jesus Christ of Latter-day Saints. He had a strong testimony of Jesus Christ and his gospel. He received many priesthood blessings with his heart condition that enabled him to live a productive life in spite of his heart problem.

Condolences and memories may be shared with the family at walker-mortuary.com