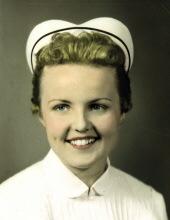 Margaret Budge Haycock was born on March 18, 1939 in Montpelier, Idaho to Taft Passey and Jean Price Budge. She was raised in Paris, Idaho and graduated from Fielding High School in 1957.

Upon graduation, she decided to go to nursing school at Ricks College in Rexburg, Idaho. That decision carried her successfully through the next 45 years.

Dick and Margaret lived in Logan, Utah and Margaret worked the night shift at the hospital for many years as she had young children who needed their mom during the day. Over the years, her career included teaching, administration, home health care, and infection control. She earned her master’s degree in 1975 from the University of Utah.

Since her family and her career didn’t keep her busy enough, she also served in many callings in the Church of Jesus Christ of Latter-Day Saints. Margaret had a strong faith and was earnestly seeking to learn more about her Savior. She served others quietly, but diligently, and was dearly loved by all who knew her.

After Dick retired, they spent many happy days, weeks and months traveling and towing their camp trailer. One of their favorite destinations was Alaska. They moved to Kanab, where Dick had been raised, and enjoyed their time there with his brothers and sisters and many friends for 20 years. Eventually, they relocated to Cortez, Colorado to spend some time in another area that they had grown to love. Dick loved to go for rides in the mountains, and Margaret loved to drive, so they were in heaven.

Margaret was adamant about “living until she died” and never wanted to be a burden to anyone. To that end, she went for a walk every morning as soon as she woke up. On March 16, 2020, she was doing just that when she fell and hit her head. She passed away on March 18, 2020 on her 81st birthday due to complications from that fall.

Due to the current travel/assembly restrictions in the world, a small family graveside service was held on Saturday, March 21, 2020. A funeral service will be scheduled when circumstances allow.