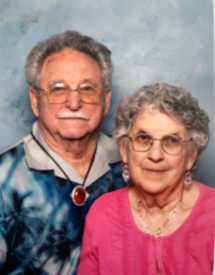 Hamilton James Wiley returned peacefully to his Father in Heaven on March 24, 2020. He was born to Rendolph John Wiley and Vivian Eliason on December 14, 1926 in Logan, Utah.

After his service in the Navy, Hamilton married Rose Marie Rogers. They like to joke that they were married three times but were never divorced. They eloped to Evanston, Wyoming on April 23, 1946 but didn’t tell anyone. While riding with Rose Marie’s father, he told them that if they ever ran away and got married that he’d kill the S.O.B. so they married again on June 30, 1947 and were later Sealed in the Logan Temple on October 4, 1950.

Hamilton worked for The Church of Jesus Christ of Latter-Day Saints as a diesel mechanic and semi-truck driver from 1952 till he retired in 1991. His son loved riding along with his dad either in the semi or motor home.

Hamilton loved to stay busy fixing all sorts of things in his garage, making wooden toys for children, weaving hats and scarves.

A family viewing was held on Monday, March 30, 2020 at the Larkin Mortuary located at 260 East South Temple, Salt Lake City, Utah. Burial was in the Logan Cemetery, with Military Honors.

Condolences and memories may be shared with the family at larkinmortuary.com