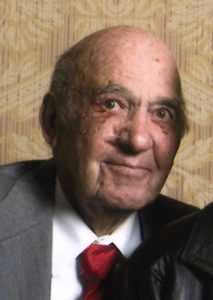 He was born on December 21, 1931 in Hyde Park, Utah, to Aletha Woolf and Ross Thurston. He was the second child of 4 with an older brother Ross (Devoe), younger brother Archie and sister Kathryn. He attended Hyde Park grade school, Logan Jr. High and High School in Milford, Utah.

He married Betty Hickman in 1950, they were later divorced.

Ferris and Anita Frost were married March 29, 1980, in Brigham City, Utah that marriage was later solemnized in the Ogden Utah Temple.

He was a High Priest in the Brigham City 5th Ward. He had a special assignment to work in a stake garden and orchard for 10 years, doing the cultivating, irrigation and helping those who came to participate. He enjoyed meeting new people and working with everyone. Ferris had the opportunity to participate in the Sesquicentennial Mormon Trail Wagon Train Reenactment in 1997 driving a wagon and team of horses traveling all the way from Florence, Nebraska, to the Salt Lake Valley. This was a special experience and he made life-long friends. He said he was glad he did it but didn’t want to go again.

Ferris was a truck driver and received recognition for driving a million miles accident free. He then worked for Brigham City Corp. and was the first operator for the new automated garbage pick-up. He was proud of this job and his ability to help people.

Ferris and Anita enjoyed traveling with friends and family and visited many fun places. Ferris was happiest on a tractor or a horse and being outside.

He was preceded in death by his parents, brother Ross and sister Kathryn, son Kelly and grandson Joshua. He is survived by his brother Archie, children, Michael, Rodney, Mark, Rick and Leanne and 15 grandchildren and many great-grandchildren, great-great grandchildren and nieces and nephews.

Due to COVID-19 outbreak the family is holding a private service. If you would like to watch the live stream of the funeral on Thursday, April 2, 2020, please email mandy@gfc-utah.com for the link.

Condolences and memories may be shared with the family at gfc-utah.com