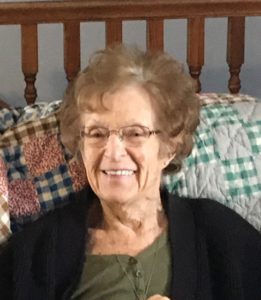 Sharon was born August 24, 1934, in Hampton, Iowa, to Henry Andrew Gerber and Helen Mary O’Toole. Her family moved to Park City, Utah, when she was a child. She was educated at St. Mary of the Wasatch Parochial School in Salt Lake City. They lived for a time in Kimball Junction, Denver, and Salt Lake City. Her family moved to North Ogden during her senior year, where she graduated from Weber High School in 1952. She began her college education at Weber State College and left to marry the love of her life.

Sharon was 19 when she married Jack F. Clark, and they raised their family in South Weber. She took an active role in the PTA, Scouting, and various activities that enriched her children’s lives. She was a licensed beautician and owned her own beauty salon in their South Weber home. She also worked at Anderson Lumber Co., Powder Mountain Ski Resort, and Osco Drug/Rite-Aid before retiring.

Sharon enjoyed skiing, fishing, river rafting, gardening, traveling, and playing cards with her family. Many fond memories and long-told stories were created at Powder Mountain, as well as at Little Lyman Lake in the Uinta Mountains. She was always seen with a smile, taking a friendly interest in the lives of neighbors and strangers alike.

She was a member of the Roman Catholic Church, and the fundamentals of her faith were a compass for her life. Following her move to Tremonton, her Malad home was renovated and is now the St. Paul Mission Church for the Catholic community in the greater Malad area. She was able to attend the dedication.

Condolences and memories may be shared with the family at aaronsmortuary.com