RSL mascot Leo the Lion breaks the ribbon at a new four-plex shelter for CAPSA in Logan.

LOGAN – A project that began months ago was completed just in time to help those in crisis due to the coronavirus. But it has nothing to do with the medical field. In January, CAPSA began the process of purchasing and rehabilitating a four-plex that could be used as affordable housing for people fleeing from abuse. Now, the multi-family unit will be used as an extension of the nonprofit organization’s efforts to help victims of domestic violence, sexual assault and rape recovery. 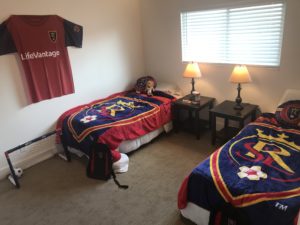 Jill Anderson, executive director of CAPSA, said the donations from the Dell Loy Hansen Family Foundation to purchase the building and $60,000 in donations from Real Salt Lake Foundation for repairs were incredibly timely.

At a ribbon cutting for the facility on Thursday, Anderson explained that people isolate in their own homes during times of crisis, and for some people the safest place for them is at school or at work.

“In this situation they’re stuck at home, isolated even more with their abuser. It’s a time they need to get out and be safe.”

She said the building is being used immediately as an emergency shelter. 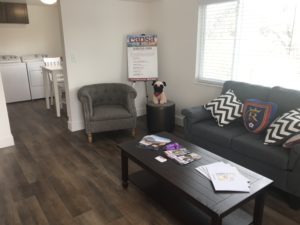 “When the pandemic hit, when the crisis hit, we needed to reduce the capacity of our emergency shelter,” Anderson explained, “and quickly transitioned into creating this as an extension of that shelter so we could maintain the social distancing that we needed to, including no sharing of bathrooms or communal areas in our shelter where survivors would normally congregate and support each other.

“With that reduced capacity, in combination with more and more people coming to us for help, we were very concerned about where we were going to house these folks. The RSL Foundation jumped in and said, ‘let’s get this done.'”

The building wasn’t scheduled to be fully renovated for another month, but with the help of RSL Foundation and Wasatch Construction, the building was completed quickly. RSL Foundation Executive Director Mary VanMinde said her group initially got involved in January with enthusiastic support from Real Salt Lake and Utah Royals, especially.

“Ten days ago,” VanMinde explained, “CAPSA called and said ‘we really need this building coming online. With this pandemic we are seeing such a stress on our families and on our shelter that we would really love to get this online.'” 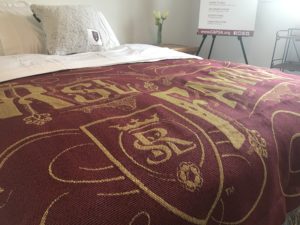 The multi-family building was decorated throughout with Real Salt Lake memorabilia, including posters, bed covers, and blankets.

“CAPSA is so amazing in what they do and well-known that getting the licensing and all of that for this building is done,” VanMinde added. “So, they will be able to move families into this building tonight. That’s the urgency of getting this together.”

Instead of a traditional ribbon cutting with scissors, RSL mascot Leo the Lion ripped the ribbon and invited people inside.

The address of the four-plex is being kept private to protect victims of domestic violence who may staying there. Once the coronavirus pandemic subsides the four-plex will be used as transitional housing for those escaping abuse.