In back-to-back seasons, Mason Falslev dominated the court in Region 11. And in his first year as the head coach of the Ridgeline Riverhawks Kyle Day not only exceeded expectations, but also made the Riverhawks into one of the top teams in the state. Because of their impacts on the court for the 2019-2020 season, a Cache Valley Media Group sports panel has named Falslev as the Region 11 Player of the Year and Day as the Region 11 Coach of the Year. 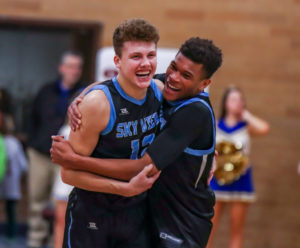 Mason Falslev – Player of the Year

The Sky View High School senior led the Bobcats to a runner up finish in the state 4A basketball championship and will go down as one of the greatest to ever wear a Sky View jersey. Falslev finishes his basketball career as Sky View’s all-time leading scorer. He finished 11th all-time on the state of Utah scoring list with 1,936 points in his career. He averaged approximately 20 points a game as a senior, scoring 25 or more points on seven different occasions this year. Falslev recorded two triple doubles in his career, both in his senior season. His career high in points was 43 vs Highland, Idaho as a sophomore; his career high in rebounds was 23 vs Weber his senior season; and, Falslev’s 12 assists vs Canyon View was his career high during his junior season.

“Mason is one of the best athletes I have ever watched at the high school level,” said “Hurricane” John Newbold, play-by-play voice for the Sky View Bobcats on 106.9 The FAN. “He is extremely competitive on the court and will do whatever it takes to win. If that means one night he is the leading scorer, then he will do that. If opposing teams double or triple team, then he will get his teammates involved.

“He just wants to win. Going into the 4A state tournament he led 4A in scoring and assists and was 3rd in rebounding. He is a true team player and it is hard to imagine not seeing him in a Bobcat uniform in the future. High school athletics will truly miss having him on the playing field.”

Kyle Day – Coach of the Year

Ridgeline High School captured a share of the Region 11 regular season championship and it is hard to argue against the coaching decisions made by Kyle Day that got the Riverhawks to that success. “Upon being named the head coach at Ridgeline High School this past year, he has hit the ground running with an outstanding energetic attitude,” said Dave Simmons, play-by-play voice for the Ridgeline Riverhawks on 104.5 The Ranch.

“From the moment I met him I understood why the kids liked being around him,” Simmons added. “He is a very positive person with an infectious personality. Without even seeing him coach a varsity game, I understood that he was already well on his way to some great things. More than half the battle to being a great coach is getting the ‘buy in’ from his players and their families.”

Coming into the 2019-2020 season, there weren’t many expectations about a young and relatively inexperienced Ridgeline Riverhawks basketball team and a new head coach. Coach Day exceeded those expectations with a 9-1 Region 11 record and the #3 overall ranking in 4A boys basketball.

“There were games when it was very apparent that the scouting report and execution of the game plan made the difference in the outcome of the game,” Simmons continued. “Before the season started, I think that many people would have predicted that Ridgeline was probably going to finish somewhere in the middle of the region pack. Those expectations were not only met, but were exceeded with a co-region championship performance.”