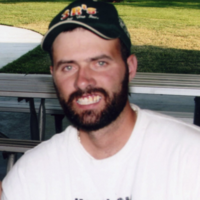 James Richard (Maverick) Ward, age 39, passed away due to acute respiratory failure in Malad, Idaho, on March 2, 2020. James was born on October 16, 1980, to Richard and Helen Wayman Ward in Logan, Utah. He was the fifth of seven children.

He graduated from Malad High School in 1999. After graduation, James helped his father on the family ranch. For many years, he was his Dad’s right-hand man. He liked to drive the baler and help put up hay. He also raised a few of his own cows. He had a knack for taming his cows and gave each of them a special name. He was able to walk up to most of his cows and wrap his arms around their necks without frightening them. In his later years, he enjoyed riding in the combine with his cousin, Steven, and he also enjoyed driving his car around, daily checking on the farming operation.

James enjoyed watching sports. He supported the Malad High School teams and was one of their biggest fans. He tried to attend every game. He was also an avid Green Bay Packers fan and always looked forward to the football season each year. James liked all kinds of music and enjoyed participating in the Pep Band while in school. He had a phenomenal memory and could recall all kinds of information for his friends and family. He was a great entertainer and will be sorely missed.

James treasured his lifelong friends and was sincerely happy for their life successes. He had a pleasant personality and loved talking to everyone. James accepted his physical challenges with Myotonic Muscular Dystophy with patience and fortitude, seldom complaining.

James was an active member of The Church of Jesus Christ of Latter-day Saints. He was blessed to belong to a loving congregation, which he cherished. He was always willing to participate in worship services.